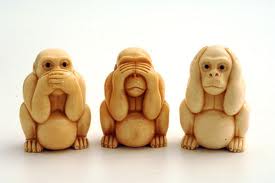 This is a story about the three wise monkeys. Or at least what we have come to think of as the three "wise" monkeys.
I'd rather re-interpret the image to reflect the current condition of western secular state of mind that is anything but wise. Speak no evil (because it is politically incorrect) See no evil (because we have our heads in the sand) and Hear no evil ( because we're in self-denial).

How widespread is this mentality?
I can get a good idea by how few people have actually bothered to watch the video The Third Jihad posted here on my blog.
I can specifically mention Mayor Michael Bloomberg (Jewish and the 12th richest man in the U.S.A.) being critical of the movie Third Jihad.http://www.thenational.ae/news/world/americas/new-york-mayor-bloomberg-blasts-use-of-the-third-jihad-film-in-nypd-training

(he hasn't seen the movie)

Maybe I should be more afraid of ignorance, stupidity and naivety of my peers than the threat of radical Muslims. At least radical Muslims tell us exactly what their agenda is all about if we only bother to pay attention.
Posted by Lexcen at 8:38 am