Is Human Behaviour an Algorithm? 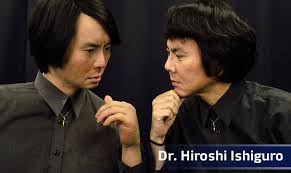 I've often wondered about patterns of behavior.
I observe my cats for example, different generations behave remarkably similarly. In fact, it's an amusing pastime for cat owners to reflect on how common certain cat behaviour can be. Is cat behaviour merely an inherited algorithm?

And then consider AI and the possibility that at some point in the future, androids will be programmed with an algorithm that lets them mimic human behaviour.
Hiroshi Ishiguro builds androids and explores the possibilities of human attachment to androids.  https://www.wired.com/2017/10/hiroshi-ishiguro-when-robots-act-just-like-humans/

I put this idea on it's head and think, what if humans are programmed to behave in a certain way, in fact, by an algorithm?
If an algorithm can predict human behaviour, doesn't that suggest that humans are just a result of a very complex algorithm?
https://medium.com/intuitionmachine/deep-learning-to-predict-human-behavior-a2cd2ce14132
Posted by Lexcen at 2:33 pm

Email ThisBlogThis!Share to TwitterShare to FacebookShare to Pinterest
Labels: Behaviour, behaviour and algorithm

frencieoswald jennistontaxton said...
This comment has been removed by the author.
8:36 pm

Every one of these tricks are explained so that you can see precisely how to do them. More information on Top 7 Best Mentalism Books Available Today! - Mentalism Minds on mentalismminds.com.