Mr Verstandig (a story for Kirsten) 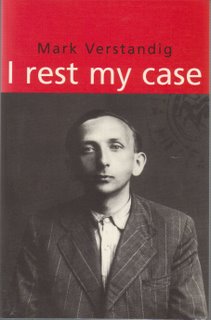 Many years ago, my wife was working in a shop where a regular customer became very fond of her. He used to call her "my Jewish princess" although she isn't Jewish. Every time he would come into the shop, they would make small talk, and she would often use the expression "I rest my case". Mr Verstandig, who was about 86 years of age at the time, was prompted by this expression to mention to her that in fact, he had recently had his book published with the title " I Rest My Case". The following day, he brought in a copy which he had signed and presented it to her.
Many people have a story to tell, few of them have taken the challenge to write a book and attempt to have it published. Mr Verstandig, an Eastern European Jew survived the persecution of the Holocaust. At the time he was a rising star in the legal profession in his country. His career was cut short, his story is how he survived and finally emigrated to Australia. It is a very sad story.
Survival became his main priority.What stands out for me after reading his story, is how his whole perception of the world and especially his faith in the Legal system was shattered. The title encapsulates an image of a lawyer summing up his argument as well as someone who has picked up the pieces of a shattered life to start again.
It is a remarkable story because there is no bitterness as you might expect, just resignation to accept the facts.
Posted by Lexcen at 2:04 am