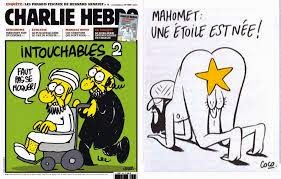 The killing of Charlie Hebdo staff in France is a criminal act.
No excuses, no justification is good enough.

How often do I hear the comment, intended to placate "Islamophobes" that the violence is only perpetrated by a minority.

Ayaan Hirsi Ali, Theo Van Gogh,Salman Rushdie can tell us the cost they paid for upsetting the so called minority.

We all end up paying a high price for our tolerance of the intolerant. We stand on high moral ground yet we cower to an ideology masking itself as a religion which is in truth a political/religious movement that is immoral, unjust, anti-everything we can think of ...and worships killing as the highest form of expression of religious faith.

We must all make a stand in support of those who express opinions that may be construed as offensive because free speech is about being offensive.
Posted by Lexcen at 7:20 am