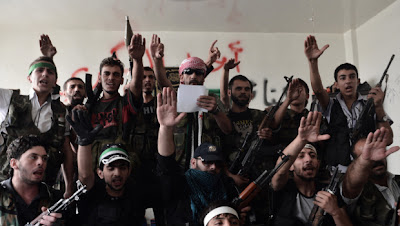 Should the west support the Syrian rebels or not?
European Union foreign ministers have decided against aiding Syrian rebels. The U.K. is in favor. Probably because the U.K. has been infiltrated by Islamists.

Even more intriguing, considering the unspoken theory that Obama retains Muslim beliefs, is the fact that Obama was instrumental in the extermination of Osama bin Laden.

Now I'm not an apologist for Obama. I just find it intriguing that the complexity of world politics can be so...paradoxical...

Obama will be criticized for not supporting democracy. That is, accept the Islamist created chaos in Syria, support the rebels and eventually move on to an election that will favor a Muslim Brotherhood candidate. Echoes of Egypt if you will.

I think I better pinch myself and get a grip on reality before I start looking under my bed for traces of the Muslim Brotherhood.